God is NOT dead, neither has He ceased to do miracles.

"Praise God from who all blessings flow.
Praise Him all creatures here below."
(The following is an excerpt from an article in Meridian Magazine today. It is just too good not to share. Please go to the link above to read the whole story including excerpts from Sara's blog entries made while keeping vigil over her child and not knowing what the outcome might be. It is well worth the reading.)

Six weeks ago, 17-month old Bronson Staker was pronounced dead in a Utah hospital. He had drowned, when his mother Sara Staker was distracted briefly and left the room to attend to something, and returned to a nightmare--finding him face up and limp in the bathtub.

“It was horrible. It was the most helpless feeling I’ve ever had in my life,” Sara told TODAY’s Lester Holt Friday in New York. “There was no question in my mind that he was gone. He was white, his lips were blue. His eyes were rolled back.”

He had neither pulse nor breath. She tried CPR on him while she waited for the EMS team, but she couldn’t revive him—and then on the frantic ride to the hospital—neither could they.

At the hospital, Bronson was pronounced DOA—dead on arrival.

Yet last week, a completely normal and healthy Bronson played and chattered on his father Matthew’s lap as the couple was interviewed on national television for the Today show.

The reporters had to call it what it was—a miracle. (See a video clip of the story here)

Here is the video the Stakers made to document Bronson’s Miracle:

Posted by stampgram at 9:41 AM 1 comments
Labels: Bronson, Miracle

It has been so long since I have put up any new art here...life just gets in the way sometimes it seems. I have been working on some things since last I posted though and will try to eventually get what I can up; but for now I will put up the newest projects. 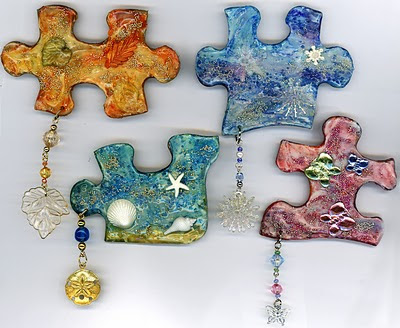 Here we have the magnets that I made for Beckie's Four Season's Puzzle Swap on our Paper Trader's group. They were fun to do. I used artist's paste for the texture then when that was dry I watercolored them to give the swirled colors. Next I coated them with crystal lacquer and added the charms and micro-beads to the wet lacquer so they would be embedded. Add a beaded charm and they turned out pretty cute, I think. lol

Next we have my Gothic Arches for the Renaissance Women Swap I hosted on Paper Traders. It was a six for six swap but Beckie, Letha and I often try to do one for each other as well when we all participate and swap amongst ourselves too so I made extras for them and myself as well. 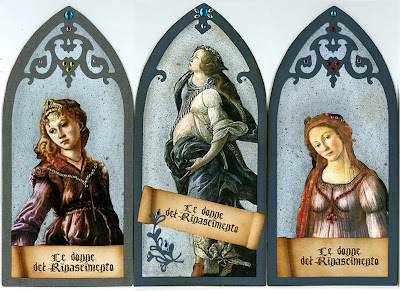 I used my new Silhouette Digital Cutter Machine to cut the arch overlay (which I designed myself!) . That worked great and so much nicer than trying to cut them with an X-acto knife! 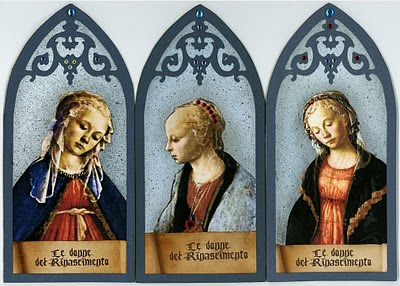 The arches were cut from heavy watercolor paper, then layered with a textured paper on which I used charcoal to create the shadowing effect (which does not show up very well in the scans but looks great in real life). 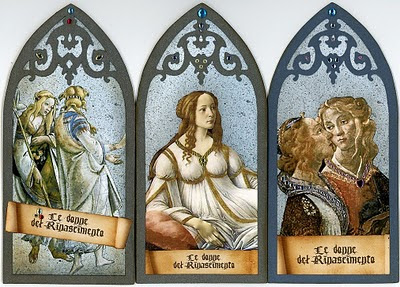 The images are all from artwork by Italian Renaissance painter Sandro Botticelli which I cut by hand and layered on the arches. Then I layered on the scroll labels and arch overlays. Finally I added crystal jewels to them to give sparkle and shine. (Thanks Laurie for the blue jewels!) I didn't scan the backs but they too are finished with a picture of Botticelli and a brief story about him and his art, done in the same style as the fronts. 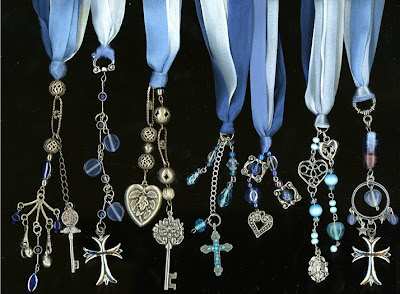 These are the charms that I made to go with my pages. I actually made two more but forgot to scan them before giving them away. They were fun to do.

One World One Heart

I did not do a giveaway in the One World One Heart event this year. I really had intended to and had an artpiece to give but I wanted to mat and frame it, and I was ill and just couldn't get it done. I was only able to visit less than 100 of the more than a thousand blogs that participated so was so surprised to have won something....but I DID! I won the lovely Vintage Ephemeral Package from Laurie at Indulge Your Shelf. 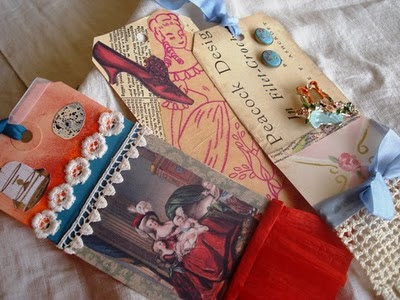 The pictures are from Laurie's blog and don't show all the wonderful goodies that were in the package but give you a good idea. I love "old stuff" so this was a wonderful prize for me....And it came at the perfect time as I was working on my Gothic Arches and was able to use the blue crystal jewels on them, and inspired me to get out some other colored jewels that I had been "saving" and use them too. That was just what I needed to give them sparkle and life. THANK YOU, LAURIE!