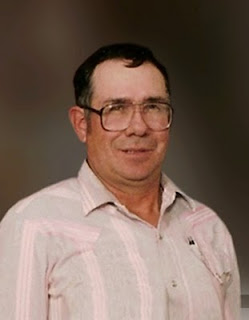 My wonderful youngest brother passed away unexpectedly yesterday morning from a massive coronary event. Ronnie was one of the sweetest, kindest people you could ever know. Mom used to say "He is one of those people who would give you the shirt off his back" and that was so true. Ronnie was always one of the best since he was just the smallest little kid. Always happy, always smiling and always a friend to everyone he knew. As far as I know he never had an enemy. If you were you wouldn't be for long as he would soon make you his friend. 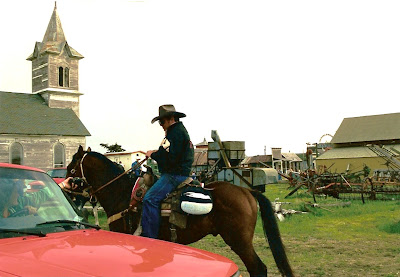 Since Mom's passing six years ago, Ronnie has been so good to Dad. Living right there in town he has checked on Dad every day and done for him the things that those of us who live far away can't - just by being there, lending an ear, or a helping hand, or just taking a few minutes to play a game of rummy. I know this has meant all the world to Dad, and it has to me too. Thank you Ronnie for being a loving brother and a caring son.

Ron was a wonderful husband and father as well. His family were all-important to him. Rarely did you see him without one or more grandchildren along. They loved being with him and he with them. When his children or grandchildren did something praiseworthy you could just see his whole being light up. They were blessed to have him in their lives. 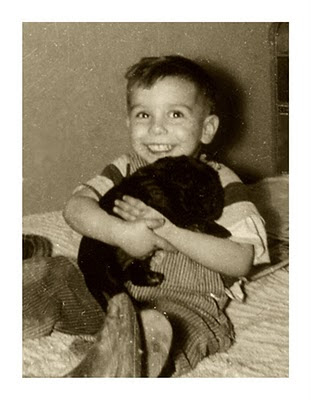 As children all of us six were close but Ronnie was one who would be happy to play "your" game, let you go first, share a treat, whatever he could do so everyone would have fun. We had so much fun as kids running around the ranch playing "cops and robbers", "cowboys and Indians", or other such games as we roamed the hillsides around the home place. Often we played hide and seek (sometimes that would take hours as we never wanted to come in). One time we never could find Ronnie. He was about 5 at the time. After a while we became worried and told Mom he wouldn't come in even though we yelled that he could come in "free". Mom was worried sick. She always feared that one of us would fall in the big dam and drown. So the search was on.

Car horns were honked (that was always the signal that you were to come to the house RIGHT NOW!), all the kids, parents and ranch hands were enlisted to search. The search went on for a couple of hours to no avail. We were all frantic by then. As it got toward evening and the day cooled off we finally heard him yelling and crying. He had crawled into the grain bin of the combine to hide and had fallen asleep on the warm grain. But when it got cooler he woke up and realized that he could not get out. After a good chastening for playing around machinery, there were certainly a lot of hugs and kisses given by all, and most especially by our mother. Our baby brother was safely home.

Our hearts are heavy now. Our sweet little brother is gone from us. We will miss him all our days, but I am sure he is being hugged and kissed by our dear mother as she welcomes him safely home once again. Ronnie we love you, we will miss you, you will be in our hearts always.

Our thoughts and prayers go out to Thesa, the children, grandchildren and great grandchildren. Ronnie will be greatly missed by all whose lives he touched.

James Ronald Ireland was born November 9, 1950, at the old Kadoka Hospital, the son of F.H. “Shorty” and Betty N. (Mansfield) Ireland. He grew up on a ranch southwest of Belvidere, attending grade school at the Buffalo School and grades 7-12 at Kadoka, graduating from Kadoka High School in 1969. 4-H was a big part of his growing up years. After graduation, he attended one year of college at Black Hills State.

Ron married his high school sweetheart, Thesa Wolfe, on June 10, 1970, in Kadoka, and to this union were born four children, Holly, Naomi, Callie, and Terry. The couple worked on ranches in the badlands, Mission, Robbs Flatt, and Valentine, Nebraska, before returning to ranch in the badlands, raising quality Angus cattle and Quarter horses.

Ronnie was a longtime participant and supporter of high school rodeo, competing as a rough-stock rider at the National Finals High School Rodeo in 1969. Later, he was a clown and bullfighter for local high school rodeos. He boxed Golden Gloves for 4 years in his teens, placing regionally.

He was well-known in eight states as an experienced freeze brander and AI man, and always ready to give the neighbors a helping hand. Ronnie loved trail riding and along with his family, has hosted riders in the badlands for 20 years, entertaining riders from almost every state in the union.

Ron was preceded in death by his mother Betty Nell Ireland on May 31, 2004.

Visitation will be held 5-7 p.m. on Wednesday, April 28, at the Kadoka City Auditorium, and one hour preceding the services on Thursday.

Interment, with Masonic Rites, will be at the Kadoka Cemetery.
A memorial is established.